An amazing thing happened at Symposium

Well as I pack my bags to head back to Auckland, I have a million exciting things I have learnt this year and have come away with a huge goody bag of new tools, techniques, insights and pure excitement around the impending release of Sitecore 9.1 and SXA 1.8 (again thank you, thank you Adam Najmanowicz @adamnaj)

But the best thing that happened wasn't about Sitecore directly. It was about people and how a community of genuine, caring people can come together to make a huge difference.

If you don't know the MVP community lost one of their own a few weeks ago in a tragedy. Ryan Bailey was a true friend and a great guy who personified what it was to be a Sitecore MVP. Almost without exception when he found something new, whether a bug or a better way of doing something, he shared it with us all through his blog

Ryan was the most prolific blogger I have ever seen and helped so many through so many channels.

And to be honest, his passing left me wondering if I would be able to go on working with Sitecore, it was a shared passion that bound us together and I didn't think it would ever be the same again, and it some ways it never will be.

But then a truly amazing thing happened.

Kamruz Jaman (@jammykam) , and Akshay Sura (@akshaysura13 ) - started chatting on the Slack channel after the news had broken and wanted to do something to send some support to his family. It started with flowers and very soon had grown into a givealittle page: https://givealittle.co.nz/cause/support-for-ryans-family

And before Symposium we had managed to raise around 5k which was great by me and I'd prepared myself that if we made that, I'd be satisfied.

In some ways I was dreading Symposium, I thought I had managed to tell most folk, but knew there would be many who would only find out in Orlando, so I was prepping for a heavy load, mostly I was planning to hide in a corner and try not to cry too much in public.

But again, an amazing thing happened. From day one I was humbled and continually moved by the support and kindness shown by every single person who knew Ryan, knew of Ryan or had the heard the devastating news.

Then came the MVP summit and this is where things went next level real fast. Day one started with a minutes silence for Ryan and a memorial slideshow, and it is here I have to give a huge shout out to Pieter and Tamas for organising all of this and catching me as I skulked around the hall, making sure I had a heads up and had time to emotionally prepare - forever in their debt.

The rest of the day and the next morning was a blur of exciting recaps and deep dives, SXA, JSS, Universal Tracker, Horizon and much more, not sure I remember much detail but I took a lot of pictures and the slide decks are rolling out as we speak which sorts out my FOMO.


For the whole afternoon on day two, the main room screens looked like this: 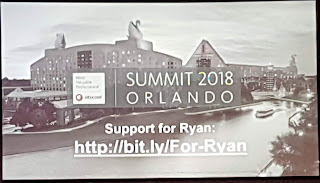 The shortened link lead them to this page:  https://givealittle.co.nz/cause/support-for-ryans-family

Well, the night before this fellow named Corey Smith (@sitecorey) who was a friend of Ryan's as well, (He lives in Atlanta Georgia and is a true Southern gentleman) 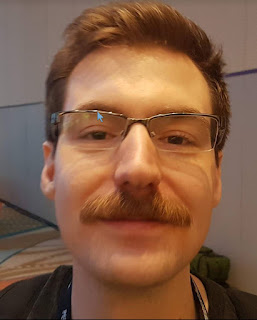 Check out that stache, it becomes very important later in the story

Well he promised on Twitter that if donations went past 10k he would shave off the hideous toilet brush we have teased him about for years. 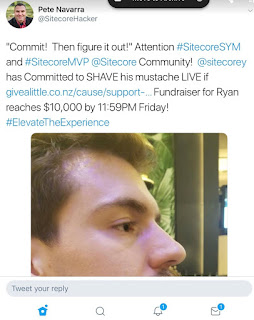 He may have thought his stache was safe as we were only at about 6k but things rapidly took a different turn, as you might expect from a bunch of geeks.

Yes Twitter lit up, hash tags were created and the whole community piled in boots and all. 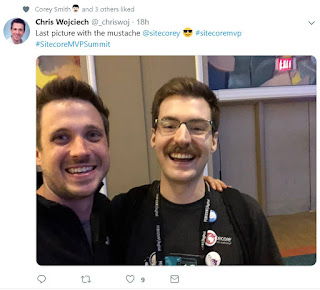 Then this guy weighed in and said he’s lose his beard if we made 12k – this is Kam Figy (@kamsar) by the way . 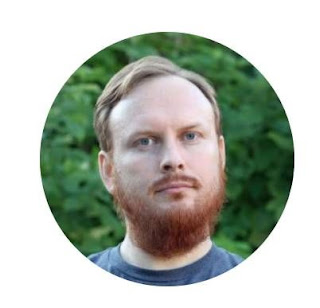 Well thanks to some very generous people we got to this in a little under 4 hours. 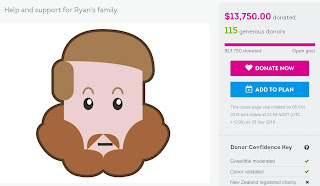 So this had to happen – live on stage in front of the whole MVP summit who all filmed it and gathered round to cheer and make jokes at Corey’s expense, the moustache was removed. ("little boy have you lost your Momma") 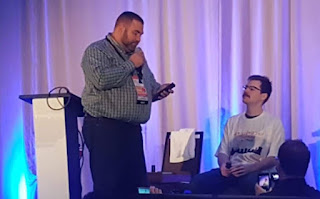 The whole shaving video can be seen on youtube here:

And here we are after, Kam lost the beard but understandably was nervous about Pete shaving it, so discretely did it himself. 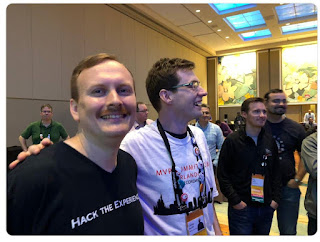 But the day hadn't finished throwing up amazing stuff. 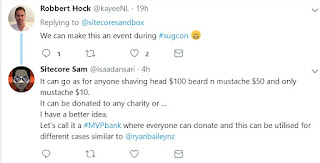 So this has now turned into an annual thing where we will all grow gross facial hair and then have a mass shave off at the end of our next summit, which is a great thing to come out of it.

Not only have we provided incredible support to his family, we have also firmly embedded the notion that while we are just people who work with a software product, we are also a powerful community capable to helping, healing and doing some very good things.

As Ryan's sister said to me "I'm just so happy he had you and the others. I've never come across a workplace where the people were family. Hopefully one day"

Bearing in mind we are a geographically distributed family, this is truly an amazing thing and we can all be proud of what we achieved.

To one and all, I will never forget this incredible event that brought healing and closure to so many of us, such good things coming from a tragedy are a tribute to you all and I thank you from the bottom of my heart.